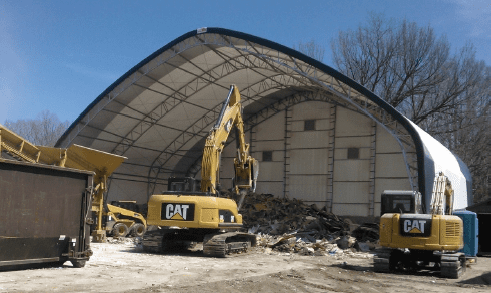 Located in Davidson County, Todco Inc. is a wood recycler and mulch manufacturer that offers a wide range of products, including recycled wood fuel and a variety of natural and colored mulch. Building on the company’s solid business foundation and reputation, Todco’s newest venture into construction and demolition recycling provides a new recycling outlet in central North Carolina and is already making an impact.

Todco has been a family affair since it was founded in 1991 by husband and wife team, Todd and Cherie Warfford. The company began with a focus on yard waste and wood waste from the furniture industry to make boiler fuel. When furniture manufacturing began to decline, Todco transitioned into mulch products made from both virgin and recycled material. In 1995, the Warffords started a new hauling company, Best Disposal that hauls recycling, municipal solid waste, and wood.

Colored mulch, shown above, is one of the many recycled wood products produced by Todco.

In the spring of 2014, Todco began operation of the company’s newly constructed and per-mitted C&D recycling facility. The C&D waste is delivered to the facility by Best Disposal, con-tractors and other waste disposal service providers. Established in part with funds from the RBAC grants in 2012 and 2013, the new C&D processing facility is recycling approximately 80 percent of incoming material. 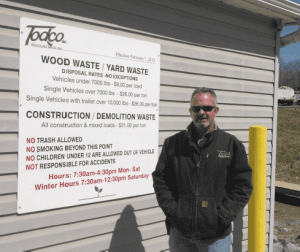 Todco’s Todd Warfford (above) and his wife Cherie founded the wood processing company in 1991. In 2014, Todco expanded service to include mixed C&D processing and recycling.

The Warffords’ son, Dalton Warfford, oversees a crew of temporary employees who sort the C&D material on the covered pad and at a series of stations on the raised picking line. Todco stores the construction waste until they have enough material to run the line for five straight days. As the loads are brought in and unloaded on a covered pad, crews pull out items that can slow down the line picking process, such as plastic sheeting, HVAC material, dry wall and insulation.

Material is then screened to sort out dirt and other small pieces of masonry. A variety of materials, such as cardboard, wood, masonry, metal, plastic bottles, and paper, are separated for recycling by the crews on the raised picking line.

The raised picking line shown above allows workers to sort a variety of materials, including cardboard, wood, masonry, metal, plastic bottles and paper, for recycling.

According to Todd Warfford, the biggest challenge has been optimizing the speed of the conveyer belt to allow the crew to process the material in a timely matter while also maximizing the opportunity to recover as much construction debris as possible.

Todco’s C&D operation is focusing on the materials that they have markets for, so they are selective about the loads they take in. Most of their current material mix comes from construction projects rather than demolition. But Todco has already found success and is looking at a bright future in C&D material recycling. 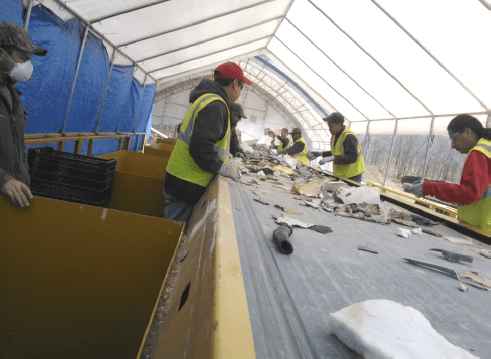 Todco’s crew of temporary employees sort mixed construction debris for recycling as it moves past on the picking line’s conveyor belt.

Best Disposal Inc. is doing “whatever it takes” to keep recycling out of NC landfills. Contact us at (336) 249-6630 for a consultation!